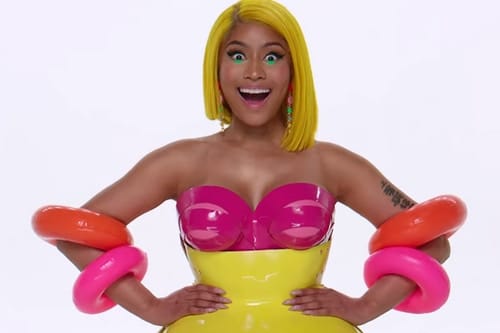 There’s no doubt Nicki is a rock star and we definitely love her talent but we want to know…What do you really think of this beautiful Trinidadian lady?  Does her ‘Barbie Tingz’ do it for you?

“The 35-year-old rapper proudly put her curvaceous figure on full-display as she released two music videos on Friday.

Nicki was definitely on brand in skimpy looks which showed off her cleavage and her derriere in the new clips for singles Chun-Li and Barbie Tings.

Perhaps her raciest look from the Barbie Tings video came when she rocked a brown ***** thong which showed off her bodacious backside and curvy figure.

She teamed the look with a matching ***** fur jacket with the sleeves rolled up.

Her brunette tresses were put into two buns as she accentuated her natural looks with shiny pink lip.

Her hair was blonde and gathered up into a high bun, and she wore a pair of gleaming black leather boots decorated with spikes.

Nicki’s stockings were matched by fishnet sleeves and a stretch of netted fabric between her cleavage and solid turtleneck.

Neon purple lights glowed behind her, spelling out: ‘NICKI’.

The video included brief snatches of footage in which she modelled nude lingerie and a hairdo that fell almost to the floor.

Nicki has been teasing the releases of the clip as earlier this week she posted an Instagram snapshot showing off one of the outfits she will be seen wearing in Friday’s music video.

The Trinidadian-born rapper, whose given name is Onika Tanya Maraj, put her generously endowed décolletage on display in a black bustier.

Slipping into thigh-high stockings, she swept part of her hair into a tiny bun and modelled extravagant hoops, slinging on a spiked purse.

The Saint James native, who was brought up in New York City, accentuated her features with makeup including a slick of scarlet lipstick.

On Sunday she was also showing her Instagram followers this outfit, though in the photo she posted that day she had flung a white coat over the ensemble.

Chun-Lie and Barbie Tingz, both of which will be on Nicki’s forthcoming studio album, were released jointly on April 12.”

This upcoming record, which is to be Nicki’s fourth studio album, has not publicly been given a title yet, nor a specific release date.