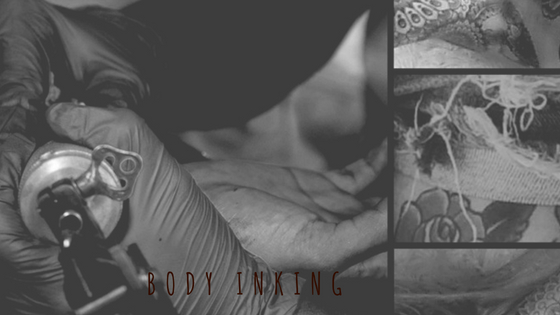 When we first met and spoke with Charlie – a brilliant, charming and beautiful 29 year old City broker originally from Hull – it was difficult to imagine that beneath the power-suit; most of her body was covered in tattoos.

From her shoulder down to the top of her knees, Charlie has managed to fool everyone at work into believing that she is free of ink.

“It took eight and a half years to complete all the pieces and I can honestly say that every penny of the £33,000 has been worth it”.

Charlie is a very confident young lady who holds a senior position at a derivatives company, where most of her colleagues are male.

As amazing and confident as Charlie is, she feels disclosing her art to her work colleagues would change the dynamics in the office and ultimately alter certain boundaries…

“No one at work (she coughs timidly) knows I have tatts, in fact I managed to conceal it (her body ink) from my family for more than 4 years but when work started on my sleeves (arms)…the game was up”.

Charlie got her first tattoo at age 17 just before University but one day (several years later) whilst visiting her folks, she forgot her dressing gown when she went and took a shower, the towel could not hide the latest pieces on her upper arm.  Charlie’s brother was first to discover her secret and when later that evening she sided with her mum about something relating to his conduct, he cunningly deflected the whole attention afforded him by revealing her secrete.

Most of us have evolved a very long way from when the appearance of an inked person teased our suspicions of their character and intentions.

In the matter of Ink, it’s fair to say that women have once again played an important role in knuckling down our perverse and often hostile views towards each other – especially because of Looks.

Over half a century ago in London, new political groups started the practise of cult-nature and used names & symbols tattooed on their upper torso as a way of identifying with a particular underground movement. By the early 80’s, public display of these arts were used to boost membership recruitment and to advertise the growing popularity of said movement.

The use of tattoos has been around for millenniums, when they were first placed near the chest (including the upper arm) for spiritual protection.  Back then, the image or symbol of a deity inked on a member of royalty was deemed to harness the powers of that god.

It is no surprise that the Cross (symbol of crucifixion), the Guardian Angel and the Skull are perhaps the most popular images in post war Europe.

It is perfectly plausible to assume that those with Ink are viewed differently to those with a clean canvas.  Depending on the individual appraising the work of art, it is negative, positive or just simply an evocative piece of art.  Whichever the outlook, the inking culture is blooming faster than tulips in a Scottish garden.

The majority of us have become hardened to the graphic display of ink within our communities.  We are far less likely to pay attention to an individual’s body art than the interesting conversation they are having with someone at the other end of a mobile phone.

If the above assertion is true, what of the scenario where you come face-to-face with a complete bald-headed person with only their lips free from ink?

When we asked Charlie how far she would ever take her work, there was only the briefest of pauses before she said “I am thinking about a couple of pieces for my feet & ankle…but I wouldn’t add anymore above my shoulders. I’m not sure I would want to change my appearance that much”

A self-confessed ink addict, we were a tiny bit surprised by Charlie’s outlook on the matter of facial or head ink.

We Want You To Tell Us

Share your views, comments and most importantly, pictures on our social media